The Proposed Action and Alternatives

The state of Utah and Washington County has spent years vetting the project alternatives that are being evaluated as part of the federal regulatory review of the LPP. They recommend the Southern Alternative as the most reliable, cost-effective and environmentally responsible alternative.

Several alternatives were considered by the Bureau of Reclamation (BOR) in the draft environmental impact statement but were eliminated from detailed analysis based on National Environmental Policy Act (NEPA) regulations.

Following is a recap of the Proposed Action and alternatives that were studied.

• Four booster pumping stations to transport the water through the pipe

The Southern Alternative is the Preferred Alternative. It would meet the need for and accomplish the purpose of the LPP project by meeting future water demands in Washington County by 2060, and it would establish a more diverse and secure water supply that would mitigate uncertainties related to relying on a single source of water. The Southern Alternative is economically, hydraulically and geotechnically feasible. In addition, it complies with the directives established by the Utah State Legislature as outlined in the 2006 Lake Powell Pipeline Development Act.

The LPP would follow a utility corridor for much of the alignment in the Southern Alternative.

The Southern Alternative and Highway Alternatives begin and end in the same locations, and both cross lands administered by the BOR and National Park Service along the same alignment. Both alternatives include the LPP water exchange contract with BOR where the state would forbear the diversion of a portion of the natural water flows that it is entitled to, and allow these flows to contribute to meeting the Endangered Species Act Upper Colorado River Recovery Implementation Program requirement in the Green River. The main difference between these two alternatives is that the Southern Alternative would travel south of the Kaibab Indian Reservation, while the alignment for the Highway Alternative would cross lands held in trust by the United States for the benefit of the Tribe.

The National Environmental Policy Act requires a No Action Alternative, which describes a future where the LPP would not be built. The Washington County Water Conservancy District would complete its few remaining local projects, but Washington County’s local water supply would be fully exhausted by about 2028. No additional source would be available to meet growing indoor or outdoor water demands. Water shortages would occur each year following 2028.

These projects could involve treatment of Washington County’s agricultural water, secondary water and wastewater effluent requiring building and operating one of the largest reverse osmosis and brine disposal evaporation pond facilities in the country at an estimated cost of up to $700 million. 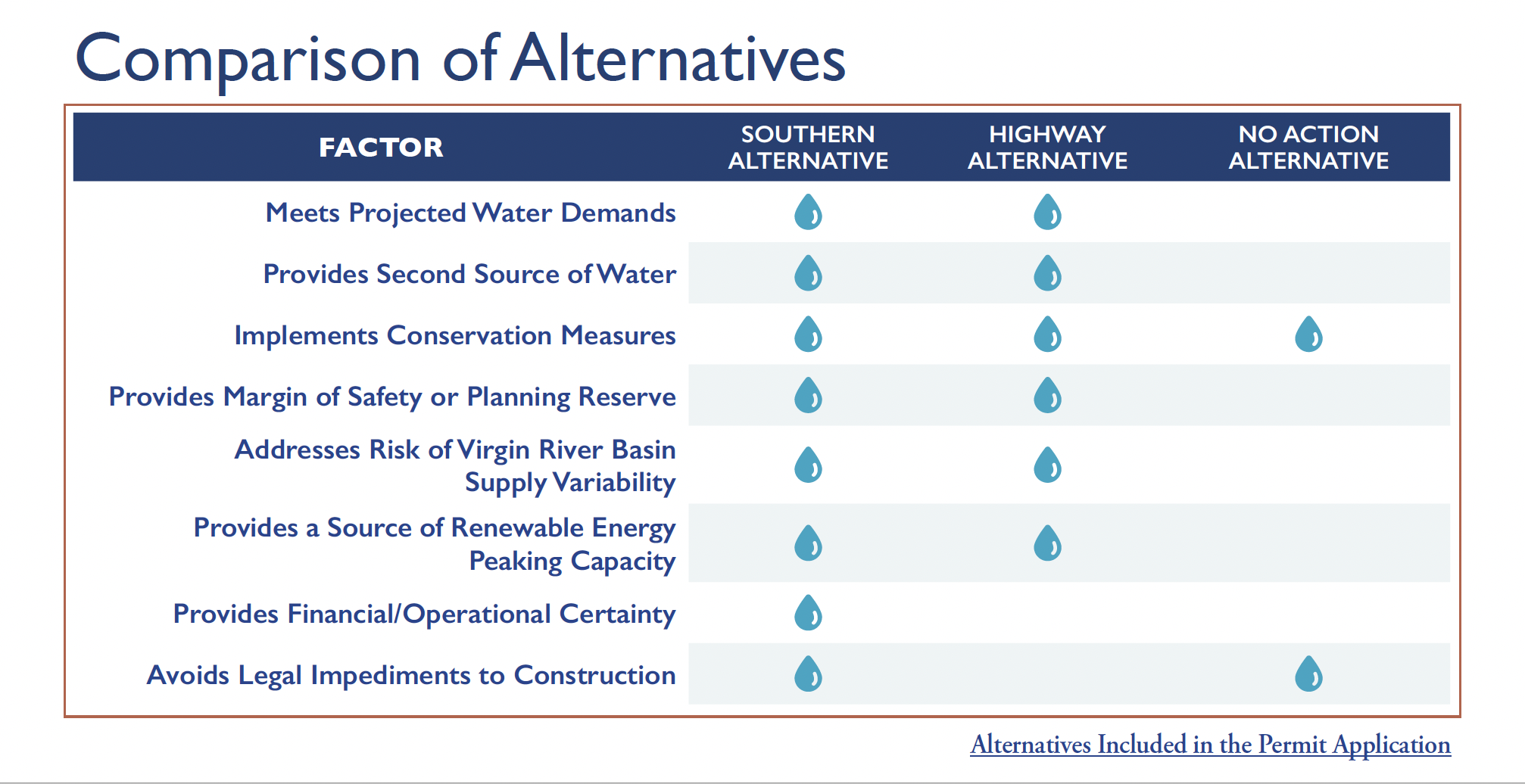